Variation in the endocannabinoid system

In a similar way, the genes that code for our endocannabinoid system/ECS come in variants, which can influence the way our ECS works.

By extension, ECS variation also determines which diseases we are likely to develop during our lives and can help predict how these diseases are best treated.

This section discusses known variations to the ECS and their impact in health and disease. 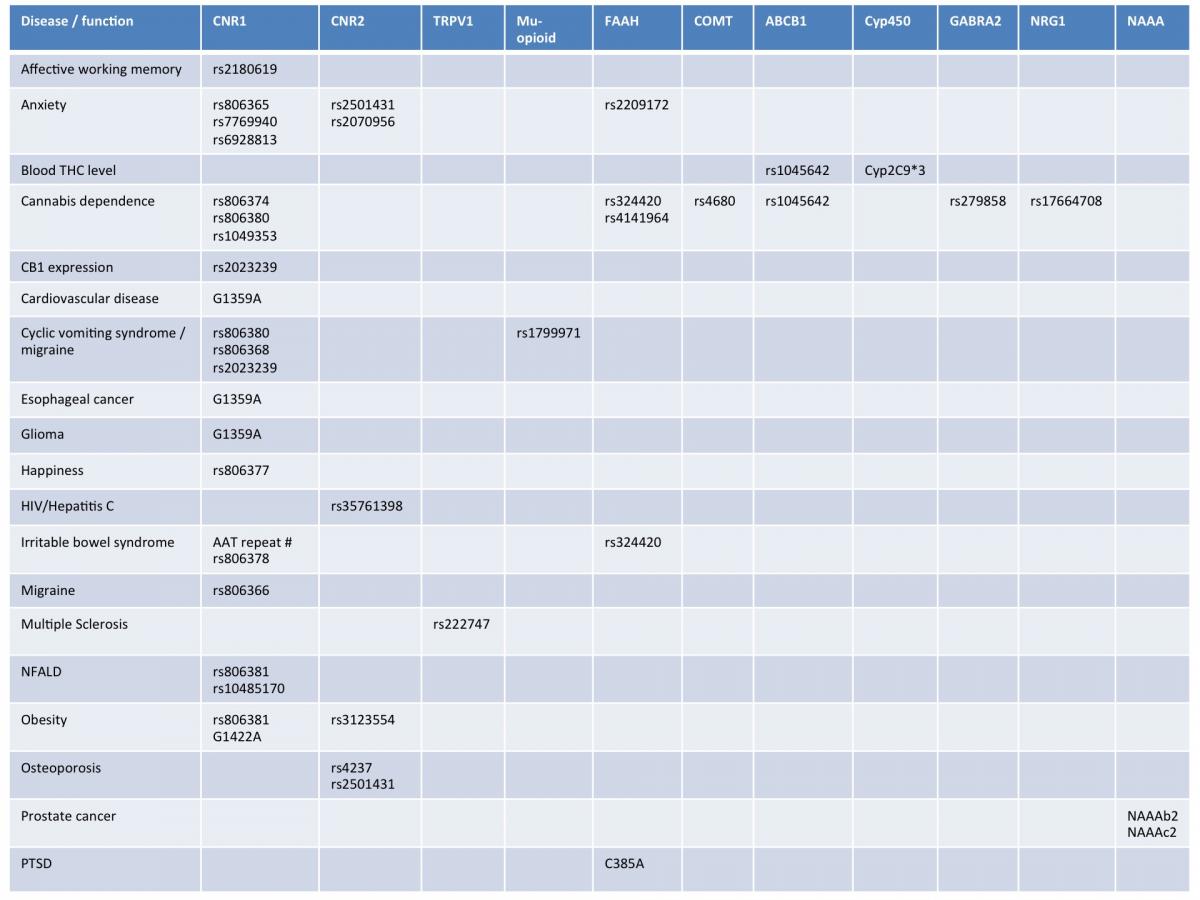 ATP-binding cassette /ABC transporters are involved in shuttling many substances across the plasma membrane, including cannabinoids like THC. In ABCB1, the C3435T (rs1045642) was found to modulate serum THC levels in the sense that heavy cannabis users carrying the T allele had significantly lower THC levels (8 ng/ml) than CC homozygotes (15.7 ng/ml) (Kebir et al., 2017).

Two polymorphisms for FAAH, rs324420 and rs4141964, were associated with an increased risk of developing cannabis dependence. For other ECS genes such as CNR1, MAGL and DAGL no such association was found (Melroy-Greif et al., 2016).

Carriers of the C allele for the CNR1 rs806374 polymorphism have an increased risk of developing cannabis dependence (Ashenhurst et al., 2017).

A polymorphism in CNR1 (rs2023239) determines the amount of expressed CB1 with the G allele expressing more CB1 than the A/A genotype (Ketcherside et al., 2017).

There is an increased risk of developing cyclic vomiting syndrome for people carrying the G allele of the CNR1 rs806380 polymorphism and a reduced risk for people with the CC phenotype for CNR1 rs806368 or those carrying the G allele of the rs1799971 polymorphism of the Mu-opioid receptor (Wasilewski et al., 2017). In addition, the Mu-opioid receptor rs1799971 G allele and the CNR1 rs806368 C allele were associated with Migraine. The C allele of CNR1 rs2023239 was associated with positive outcome of treatment (Wasilewski et al., 2017).

Cytochrome P450 enzymes are involved in the oxidation of many exogenous and endogenous substances including plant and endocannabinoids. Across the world population many variations exist within the cytochrome P450 that affect cannabinoid metabolism and therefore many ECS-related diseases. These variations are listed in http://www.ghmedical.com/endocannabinoid-system/synthesizing-degrading-enzymes/cytochrome-p450.

The CNR2 polymorphism rs35761398 was investigated in patients with HIV/Hepatitis C co-infection. Patients with the R allele being significantly more associated with inflammatory liver damage than the Q allele (Sagnelli et al., 2017).

The CNR1 gene encoding CB1 varies in the amount of AAT triplet repeats. People with more than 10 AAT repeats had a significantly higher risk of developing IBS than people with fewer AAT repeats (Jiang et al., 2014).

However, no correlation was found between the number of AAT triplets and the disease phenotype: constipation, diarrhea or mixed (Camilleri et al., 2013).

Variation in FAAH (rs324420, C385A), was found to be associated with irritable bowel syndrome and IBS-diarrhea and IBS-alternating in particular (Camilleri et al., 2008), although this is disputed (Jiang et al., 2014).

The rs806366 polymorphism of CNR1 is associated with increased headache with nausea after stressful events but not with Migraine per se (Juhasz et al., 2016).

NAFLD is often associated with Polycystic Ovary Syndrome/PCOS. The G allele of CNR1 rs806381 and the GG phenotype of rs10485170 were significantly higher in women with PCOS and NAFLD than in PCOS women without NAFLD (Kuliczkowska Plaksej et al., 2014).

The G1422A polymorphism of CNR1 is associated with increased abdominal fat in men (but not women)(Peeters et al., 2007).

In post-menopausal women the rs4237 and rs2501431 polymorphisms of CNR2 were associated with bone mineral density and osteoporosis (Zhang et al., 2015).

In patients with PTSD, the FAAH C385A mutation was associated with decreased subjective anxiety responses to a stress challenge and with reduced PTSD symptom severity (Spagnolo et al., 2016).

Melroy-Greif, W.E., Wilhelmsen, K.C., and Ehlers, C.L. (2016). Genetic variation in FAAH is associated with cannabis use disorders in a young adult sample of Mexican Americans. Drug Alcohol Depend.